Pope Francis on Friday urged Vatican disciplinarians to act “with determination” against sexual abuse committed by members of the Catholic clergy, the Holy See said in a statement, the pope’s first public pronouncement on the issue.

You know, despite the fact that his conservative bona-fides are unimpeachable, I like this new Pope. I mean…it’s hard not to like a man with the common touch—who blesses the seeing-eye dog of a blind Italian reporter and who washes the feet of Muslim women in a spirit of community and fellowship.

“But your holiness, it is difficult to identi—”

“Stop right there! You are excommunicated! Next.”

“Your holiness, we are trying to find ways of dealin—”

“And you! You’re excommunicated!”

“Not another word! Your eternal soul is condemned to hellfire.”

You see. It’s easy, and Francis shouldn’t be asking. He should be telling. At least that’s what he should be doing if he wants to save Holy Mother Church.

A quote I had to repost from WashingtonPost.com:

It seems odd the courts find that citizens cannot dance at a memorial, because the dancing distracts from the ‘solemn commemoration’ at such sites, but also find that the Westboro Baptist Church members can stage their repugnant protests at the funerals of our fallen soldiers.  Apparently, our enlightened courts do not consider the church’s protests as a distraction to the ‘solemn commemoration’ of a soldier’s funeral.  Only in America!

Couldn’t have said it better myself.  No justice.

…for Harold Camping.  Eagerly watching to see what all his followers who sold their homes, and used their own money to proclaim the apocalypse are going to react…I think he’s going to have to give some of those millions of dollars back.  Christian charity demands it. 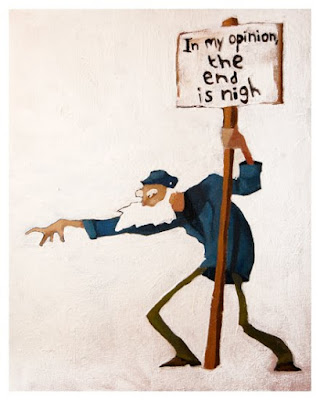 Do you have these whackos in your neighborhood? We sure do. Signs prophesying the “End of Days” on May 21st. Cries of, “REPENT!”.

I see them and I’m asking myself how did they pick that day?  In my lifetime I’ve survived several end of days scenarios.  The year 2000, 2001, 2010, hell I lived through Y2K.  Besides why on earth would a benevolent deity end the world on Saturday, my day off?  I mean, seriously?

Well don’t fear, because Huffingtonpost.com has come to the rescue with a list of 21 reasons why May 21st is not doomsday.  So don’t stop paying your bills just yet folks.

I hate organized religion. What a slick piece of work this guy is. Disgusting. If you’re a rich pastor and your congregants are poor, be like Jesus and give some of your wealth away. If you don’t, you’ve really just missed the point.

We need to bring him back to create a special ring in Hell for the Westboro Baptists.  They plan to picket Elizabeth Edwards funeral today. Ostensibly for blasphemy, assaulting God, and I quote:

Elizabeth Edwards & her faithless husband, John, lightly esteemed what they had. They coveted things that were not theirs – and presumptuously thought they could control God.

So you’re going to punish a woman because her husband cheated on her?  Or is it really just that she was a gay rights advocate.  I don’t think this has anything to with religion.  It’s for publicity.  Pure and simple.

home of the brave and also the insanely stupid.  I caught wind of this headline today:

Why do 1 in 5 Americans believe President Obama is Muslim?

I’m sorry, what?!  And this actually comes from a distinguished source, the Pew Research Center took a poll indicating that 18% of Americans think Obama is Muslim.  Bizarre.  I mean I just don’t understand how these people completely missed the memo about his being a Christian.  Sure he’s not overtly practicing the way Bill Clinton was, but still.  Did they even follow the last election?  I’m absolutely flabbergasted.

Apparently the Republicans are all about freedom of religion until it hurts someone’s feelings.  They came out in force this weekend against President Obama after he made an impassioned plea for the mosque at ground zero.  Sen. John Cornyn (Texas) wants to make this an election issue.  Cornyn believes that Obama is disconnected from Americans’ feelings on this issue and said that, “voters would render their verdict in November.”  He went on to say that Americans don’t like “being lectured to”.  Um, Senator did it every occur to you that New Yorkers don’t want to be lectured to either, particularly by some asshat Texan?