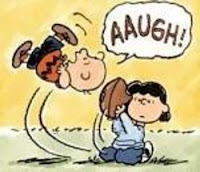 The central metaphor of the Charlie Brown cartoons was the recurring “joke” of Lucy pulling the ball away before Charlie Brown could finally kick it. Charlie would go flying and Lucy would get a cheap laugh out of it.

That’s about frustration. That’s about justice. When you put your trust in someone like Lucy, justice is not going come easy.

In the Bush era, there are quite a few Lucy characters, but the most recent ripping of the football away from the kick of justice cast Michael Mukasey in the role of Lucy. Charlie Brown is played by House Judiciary Committee chair, John Conyers. You have a feeling that Conyers has been trying to kick that ball for a long time.

You can sense his frustration building up. First Pelosi pulled the ball of impeachment from him then Karl Rove gets away, so far, with ignoring a subpoena.

There’s a bit of Moby Dick in all this too.

Maybe the plight of Buffalo Bills fans during their stretch of Super Bowl futility during the 90’s can get you there too.

Mukasey’s maddening announcement that though “we”–the Charlie Browns of the world wanting to kick the ass of the Bush Administration–had the goods on members of Justice Department who participated in illegal hiring practices that disqualified any applicants that even smelled the slightest bit liberal, he was not going to prosecute. To add insult to injury, he even threw in a mind blowing parsing of words that will go down in history as one of the great grievances against language and justice ever.

Here’s what the dictionary says about the word crime:

1. an action or an instance of negligence that is deemed injurious to the public welfare or morals or to the interests of the state and that is legally prohibited.
2. criminal activity and those engaged in it: to fight crime.
3. the habitual or frequent commission of crimes: a life of crime.
4. any offense, serious wrongdoing, or sin.
5. a foolish, senseless, or shameful act: It’s a crime to let that beautiful garden go to ruin.

Since I am still flailing through space and time waiting to hit the ground, I will turn it over to Amanda at Pandagon for her reaction:

Identifying something as a crime is not as simple as determining whether or not a law was broken. You have to examine the person who did the wrong and decide if they fit the description “criminal”, in what case, no matter what they do, it’s probably a crime. Does the person in question wear a 3-piece suit? Or do they have really big pants? Do they eat dinner with you and your friends, or do they sit in the car next to you in traffic eating a Big Mac? These may seem like silly questions to you, but to big important attorney generals, they make the difference between criminal and not-criminal. And that, of course, is the difference between crime and not-crime.

I am distressed that Attorney General Mukasey has been so quick to determine that no criminal offense has been committed in connection with the illegal hiring practices at the Department of Justice.
…
It is not enough for Mr. Mukasey to assert that things are different under his watch. The Department of Justice cannot reestablish its credibility so long as it persists in a strategy designed to avoid revealing all the facts that have so compromised the integrity of the Department of Justice and to prevent real accountability for misconduct by former DOJ officials.

There’s no way this will be forgotten. John Conyers, God willing, will still be there in five months when there’s a new Attorney General. Then we’ll tee up the football again, and instead of being Lucy, this time Mukasey and his predecessor Alberto Gonzales will be the ball. Who Lucy is we don’t know yet, but let’s just say there’s at least some chance that Conyers will get a couple of good kicks in before it’s all said and done.