Conservative talk radio host Rush Limbaugh has changed the name of his program, the latest shot in a continuing battle with progressive radio host Ed Schultz.

Limbaugh told his national radio audience this morning that the program will now be called The E.D. Show, a poke at the title of Schultz’s MSNBC program, The Ed Show.

For a long time, Schultz has made it a habit on air to call Limbaugh “the druggster,” a reference to Limbaugh’s 2003 admission of dependency on prescription drugs and Frito-Lay products.

Limbaugh finally struck back three weeks ago, saying on air that Schultz’s show is named after Mr. Ed Grimley, the character created and performed by Martin Short on SCTV and Saturday Night Live.

Schultz responded by challenging Limbaugh to perform a musical number on The Ed Show, leading to Limbaugh’s re-branding announced today.

Limbaugh also announced a sponsorship coup, signing up a major pharmaceutical product as his show’s first-ever title advertiser. “I am proud to say that this program is now The E.D. Show sponsored by Viagra,” Limbaugh intoned.

Most of us around the world think American’s have no humour (humor to you), in fact the story is that Ellis Island is just a big hospital doing ‘humorectomies’. Well if you don’t think that is funny try Buy American.

But listen up, you gotta make stuff to sell stuff. Maybe there should be a Build American campaign first, like have American stuff for people to buy.

The Canadian’s have their knickers in a twist over this campaign, but they should be laughing. To start with there is the American wastewater construction program; try and buy a General Electric water filter. GE makes them in Canada. Or the bolts and ‘manhole covers’ (sexist language not mine…)

Oh! Then there is the gas. I’m sure you won’t see separate pumps marked ‘American’ and ‘imported’ anytime soon. The fact is, it is just not that simple in this global economy we had to have.

It doesn’t bother Australians of course. Where else are you going to get your canned kangaroo or your camel steaks? But perhaps we need to start thinking about what we’ll do after we’ve culled the roos and camels and dug out and shipped all the coal and iron ore.

Headline: California Prisons Must Cut Inmate Population
Translation: “Parole Board,” from the creators of “Survivor”

Headline: Clinton, journalists return to US after pardon
Translation: Bush returns from touring the world’s Disneylands

MURDOCH SAYS “WE’RE GOING TO CHARGE FOR ALL OUR SITES!”

FOX NEWS FORCED TO LAY OFF HANNITY AND O’REILLY

We reject the view that copyright owners and their licensees are required to provide consumers with perpetual access to creative works. No other product or service providers are held to such lofty standards. No one expects computers or other electronics devices to work properly in perpetuity, and there is no reason that any particular mode of distributing copyrighted works should be required to do so.

— Steven Metalitz, Washington DC representative of the MPAA and RIAA in a letter to the US Copyright Office

What an undeniable load of crap! Plain fact is that, for the better part of century, creative works (especially music) were held to exactly this lofty standard. Moreover, no other industry forces consumers to buy a product that is crippled by design. My electronic devices aren’t engineered to self-destruct when the manufacturer instructs them to. Not so the hobbled music we purchase from online stores, where that same store must provide us with the ability to get through the DRM…until they go out of business or shutter their service. 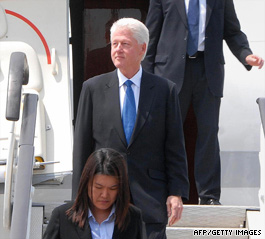 Ex-president Bill Clinton returned from North Korea today in the company of Laura Ling and Euna Lee.  The senior statesman was on a “private mission” to liberate the two American journalists held for illegally crossing into North Korean territory.  After quote, “Smoking a bowl” with the Dear Leader, Kim Jong Il, Mr. Clinton said that it was clear that North Korea meant no harm in picking up the women. They simply thought they had come to spread American propaganda and felt that that they were inappropriately dressed for Korean sensibilities.  Clinton who held a press conference at Andrew Airforce base upon landing said, “I have never had sex with either of these two women.  (Not that I didn’t think about it).  Al, you owe me big, buddy!”.

There’s no question that online bill payments—the ability to pay your credit-card bills, mortgage, or car payment with the ease of a single click—are a great convenience.  But now banks and financial institutions are abusing this system to inflate their profits and are destroying people’s credit ratings in the process.

From The Consumerist we hear about two instances where customers had their credit destroyed by predatory corporations who played games with their automated payment systems.  In the first instance, Nissan Auto Finance reversed one woman’s car payments—made on time—in each of six consecutive months without notice and without explanation, then reported her as delinquent to the credit bureaus and refused to correct their error…as they are required to do by law.

In the second, AT&T simply stole $157.00 + from one of their customers by claiming that the customer’s payment via credit-card was declined (it wasn’t) and then auto-debiting the same amount (plus hefty fees) again the next month.  Now, despite proof that AMEX didn’t decline the initial charge, AT&T refuses to do anything about the situation.

These criminals are banking on the fact that their customers don’t have the resources to sue the cr*p out of them, and for the most part they are correct.  So…when dealing with corporations that are willing to resort to out-and-out theft to keep their balance sheets in the black, what’s a consumer to do?  RETURN TO CASH, that’s what!  It is, if fact, the only alternative.  Buy your car in cash.  Pay your bills with checks.  Don’t give these bastards even a single opportunity to rip you off.

The Republican Party’s familiar elephant mascot may soon join the ranks of the unemployed, if the recommendation of a special party panel is adopted.

The seven-member committee, led by Congresswoman Michele Bachmann (MN-6), took the unprecedented step today in response to rising sensitivity
within GOP ranks about things really being from America.

“We have done a great investigation into the question, and quite simply the elephant is not from America,” said Bachmann, shortly after the 6-1 vote which adopted the bald eagle as the Republican mascot.

The lone dissenting vote was cast by Governor Charlie Crist of Florida. “I prefer the faaabulous pink flamingo,” Crist said.

Outside the committee’s meeting place at Washington’s Omni Shoreham Hotel, Bachmann spoke to a crowd of conservative activists known as “trunkers,” who oppose what they call the non-American elephant mascot. Many in the gathering held placards reading “It Is From Kenya,” and “Show Us The Pedigree.”

One couple, M.F. and Shirley A. Nutt of Westmost, North Carolina, cheered as the Minnesota House member told trunkers that the Republican Party has no problem claiming the eagle, already a national symbol, for partisan political purposes. “That’s what our party is all about,” Bachmann said.

The Nutts denied being species-ist. “But if we follow something it has to be born in America, not something from Africa and probably Muslim,” M.F. Nutt said.

Perhaps this isn’t the stimulus you were expecting?

The LUST Provision of the American Recovery and Reinvestment Act of 2009 (‘LUST Recovery Act Program’, for short) has guidelines stating that, “…certain LUST expenditures are subject to the prevailing wage requirements.” It defines “LUST Recovery Act performance measures” and warns that states that do not spend the money quickly enough will be penalized for “failure to perform.”

What does LUST stand for? Leaking Underground Storage Tank. And don’t you try and tell the federal government that contaminated ground water isn’t sexy.

If you are black, Latino, female, Jewish, Catholic, physically handicapped, Asian or of any other super-sensitive genetic make-up – Give Me A Break! And I don’t mean an arm or leg. I’m raising the argument here for the ‘White ‘it’s all your fault anyway you bastard’ Guy’.

Being a White ‘it’s all your fault anyway you bastard’ Guy I have to endure every insult imaginable; but do you hear me whining? Well okay, just this once I might be, but I’ve had enough. I want Obama to invite me for a beer, or even better a good rye, to sort this out.

The current attack appearing around the place is that ‘all men are liars’. I’m not a liar – well not often at least. But what about all those ‘super-sensitive genetic make-up’ men out there, are they complaining? NO! Because they read the subtext – “All White ‘it’s all your fault anyway you bastard’ Guys are liars”.

I adore women of nearly all sub groupings, then I get into trouble for that. But I admit to being a bit tentative when it comes to Catholic women. Now how honest is that? No lie there. Then it took years before I realized Muddy Waters was any different, apart from talent, from my white mono-cultural neighbours.

The only thing I have against the super-sensitive genetic make-up folk is they like to spoil some of the best jokes; unless they are the ones making them of course. I’d love to see free trade extended to jokes at least.