The Pope embodies moral truths that aren’t accepted, and the shortcomings and errors of priests are being used as weapons against the church… It’s not a bishop’s fault if one of his priests is stained by grave wrongdoing. And certainly the pontiff is not responsible.

— Angelo Sodano, dean of the College of Cardinals

There’s only one thing to say to such nonsense coming from the mouths of religious leaders who should really know better… WRONG-F*CKING-ANSWER!!!

Let’s get one thing absolutely clear, the Catholic Church is not a society. It is not a democracy. It is a theological order—a top-down, hierarchically structured dictatorship, where the man at the top has absolute authority over every single member of the clergy, from Cardinal Sodano to the lowest monk. And as such, his so-called “Holiness” has the power to judge, punish, and/or dismiss anyone who preys upon the church’s members. Is Benedict responsible for every instance of sexual abuse? No, but his authority over the clergy makes him absolutely responsible for every case where a pedophile priest could have been stopped…and wasn’t and every case where the church covered up the problem.

So… The more the Catholic hierarchy rallies around Benedict, the more we hear about how attacks on the pope are an orchestrated hate campaign against the church, the more we come to the realization that perhaps the Catholic Church deserves to be hated. If these hypocrites won’t take responsibility, they deserve to reap what they have sown. 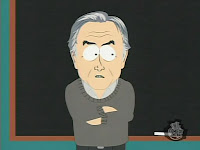 As if millions of years of magical religious hegemony wasn’t proof enough, we have the latest evidence that atheism is doomed to a marginalized existence–lame bus signs all over Europe that say, “There’s probably no God. So stop worrying and enjoy your life.”

So many of those words suck. Let’s start with ‘probably’. The man credited with “launching” the campaign is none other than South Park-bait and professional atheist Richard Dawkins, who invested £5,500 in the sign and claims that he didn’t want the word ‘probably’ in the phrase. I agree with Dawkins. They should have lost ‘probably’. They should have gotten rid of all the other words too. The two sentences don’t even make sense together. If this is supposed to be the first salvo in some kind of dialogue with believers, it’s not a very convincing one. Any believer could easily point out that they’re not worried because they know there is a God and, as such, they’re having a dandy time.

It occurs to me that being an atheist is a lot like being a Democrat. Not a bad idea on paper, then you get a look at who your leaders are and it’s a bit hard to swallow. Even with a little bit of counter-intuitive explanation by the always calm Nate Silver, Harry Reid’s latest in a long series of cave-ins makes me want to scream. Not because I care if Roland Burris lands in the Senate, but because this operation can’t do anything right and they’re the only ones in the government that aren’t Republicans.

Atheists are even harder to organize than progressives, and the idea that they threw away £135,000 on bus signs is so sad. I get the joke that comedian Ariane Sherine was going for when she thought of this idea. We see inappropriate religious advertising on virtually every mile of American highway. Where there’s a billboard there you will find some self-righteous bullshit scrawled across it in Jesus’s name. So, yes, seeing an atheist message on a bus would probably make me smile. So put it on one or two buses and make it mean something. But if you have £135,000, do something with it. Feed some people. Start up a community center. Do some missionary work. Hell, buy a senate seat, give it Dawkins and have him swear in on Ken’s Guide to the Bible. But don’t blow the whole wad on a well-meant joke that wasn’t properly scripted. 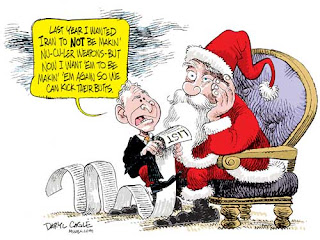 Being a sustitute teacher is tough. I avoided the job, in part, because I saw what the gig did to a friend of mine. So, it wasn’t surprising when I read this article in the Daily Mail about a sub who lost it and told her entire class that Santa Claus did not exist. She screamed at them, “It’s your parents who leave out presents on Christmas Day.”

So heinous was this crime, the school will not have the sub back and the Daily mail wouldn’t put her name in the story, I presume for her own good.

This woman is no villain, in fact, she’s a hero. She had the courage to tell little children that their parents were screwing with their minds. Who knows what kind of chain reaction this could have started. I say “could have started” because whatever truth this whistleblowing sub imparted to her former students has been reversed by yet another clever ruse perpetuated by these children’s lying parents.

You see, in order to preserve the magic of Christmas, one of the kid’s parents told all the others how to put Pandora back in the box. “We told him that she did not believe in Father Christmas because of her religion and he’s fine now.”

While they’re at it, they should tell the kids that their wicked former Sub had burned at the stake so they wouldn’t have to worry about her wicked spells turning them into worms or frogs on All Hallow’s Eve.

Bill Maher, a man who I firmly believe is moving comedy forward by sucking it dry of all funniness, has a new film coming out in which he engages religious people all over the world on the subject of whether or not what they believe is ridiculous.

Comedian, acerbic commentator, raconteur, skeptic, seeker Bill Maher and I set off in search of answers to these questions in a raunchy, rude, irreverent, outrageous, and shocking nonfiction film about the greatest fiction ever told.

I have long been disappointed by the exemplars of atheism and agnosticism in our society. Some of the most famous doubters are complete douches. Maher on the other hand is firm in his beliefs and, though he has at times been rather dismissive of people of faith, he’s not unable to have a real conversation and he seems capable of seeing people of faith as human beings.

My friend Seamus O’Rourke and I had an interesting conversation about documentaries the other day. We agreed that for the most part they give people the impression that they’re watching something truthful and on the level, when most of them have obvious biases they’re not owning up to.

I think that the approach that Maher is taking here, however, is obviously not a documentary. We do need a new genre term for these personality driven non-fiction films, but I like this approach because Maher is so far out in front of it that it can’t be mistaken for anything other than something, which may or may not be interesting, that a comedian is doing.